Canadian rocknroll is alive and well.

You know that feeling when you see a band you love, and they play the perfect mix of old and new, and you know all the words, and everyone around you is having just as much fun as you are, and everything just works? I’ve been to a lot of concerts, and it doesn’t always happen. Last night it happened.

Yukon Blonde played two sold-out shows at Lee’s Palace this week. Last night, my friend Al and I managed to find two solo tickets from Kijiji (the battlefield) to what seemed like the most coveted show in Toronto in a while. For the longest time, it felt like I was the only person who knew or liked this band and then out of nowhere they’re playing two sold-out shows in Toronto? And I didn’t get a ticket? How did this happen?

I’ve had a long love affair with Yukon Blonde. Many many years ago, around 2011 to be exact, I lined up for ages at the Horseshoe for a NXNE show. There was a special guest going on at midnight or so, and I was so young and eager I lined up and waited even though I didn’t know who would be playing. The line moved slow, and after an hour, I was finally first… but by that time, I was tired and cold and I just wanted to go home. I decided to bail. The guy behind me was in disbelief: “Are you serious? You have to stay! The special guest is Yukon Blonde!” I didn’t know them. I had never heard of them! So… I peaced.

Flash forward one year. The Lumineers (of Ho, Hey! fame) were the headliners at a NXNE show at the Horseshoe. Yukon Blonde was their opener. After an amazing day at a Jays game, we managed to get into the Horseshoe in good time and saw them both. My wheel had come full circle. I was surprised at how many songs I knew and they put on a great show. I was struck by their awesome grungey rock style, their harmonies, and their boundless energy.

(Yukon Blonde at the Horseshoe Tavern in 2012. Notice their long hair and grunge tank tops.)

And that was that for the next four years. They had been pretty quiet since releasing Tiger Talk in 2012 and they dropped off my radar. They felt like a little secret I had. This little indie band that I saw in the hot, dark abyss of the Horseshoe.

And then one day Yukon Blonde came back into my life in a big way.

At work I alternate listening to Hype Machine (for my obscure favourite songs), Q107 (for the classics), and the Edge (for the new stuff). I have a major first world problem because after an intense few years of seeing 1-2 live shows every week (!!!) I have seen all the bands I want to see. Every single one! And now I am faced with a mild disappointment because I have already seen 50-75% of all the bands in the festival circuit for the past few years so I haven’t been impressed with a lineup in a while. I know – what a struggle. And then the aftershock. After listening to a very focused, curated playlist for the past few years, one day I turned on the radio and realized that I didn’t know any top 40 or commercial radio music. For my own good I had to find some new music. There had to be some new bands out there to listen to. There are some good bands on the Edge. Sometimes I write down the names of the bands or songs I like, and research them later. Slowly but surely, I am building up that list of New Bands I Want to See.

And then it hit me. A song, that song! A song that sounds like something very old and familiar, but something brand new at the same time. A song I had never heard before but felt like I knew somewhere deep down in my soul.

(I didn’t see this video until just now but they are Canadian rock stars so just go with it.)

A new album, On Blonde, a new sound, and a new girl in the band!? I don’t remember seeing a girl on the keyboard last time I saw them but hey I’ll take it. On Blonde is a step forward for their sound. It reminds me a little of when the Arctic Monkeys released AM and everyone either loved or hated it because it was SO different from their old stuff. Like take a left turn and drive off a cliff different in a good way. The opposite of when Band of Horses released Mirage Rock which felt like a step backwards for them.

Some of the best qualities of Yukon Blonde is their strong guitar riffs and their vocal harmonies which really sounded original and unique in a sea of synth machines and auto-tune. So, naturally, a lot of fans were hesitant to embrace the dreaded synth machine which features heavily on On Blonde. But, Yukon Blonde kills it on their new album because they keep their foundation and build upon it using new equipment and new arrangements.

Last night, they rocked, synth and all – they were amazing. They looked and sounded like pros. It felt like we were witnessing a band who had found the sound that would take them from indie rock band to rock stars. 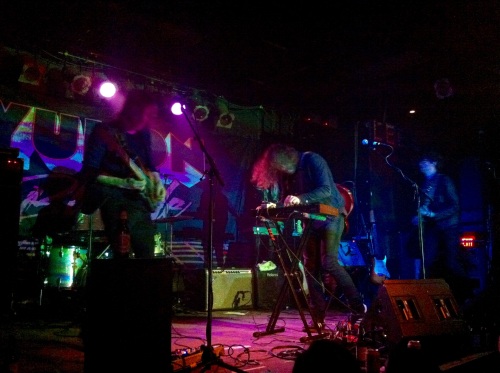 Yes, they played the best mix of old and new. You can’t rest on your laurels, but you can’t forget about them either. There has been a lot of heat on message boards and comment sections about how they abandoned their roots and sold out and sold their souls to buy that damn synth machine. But honestly, each song sounded like a little chapter in a greater anthology. And, if you weren’t a long-time fan I don’t think you could tell which was an old song and which was new because even though their albums sound different, they fit together. Yukon Blonde grew up and so did I and so did we all.

I am still on cloud nine and sorting though the myriad of feelings I have from last night. Please do yourself a favour and listen to On Blonde in its entirety. Spin is streaming it here via soundcloud. And then go and buy yourself a ticket to see Yukon Blonde live so you can get a taste of what I am feeling right now. You will not regret it.